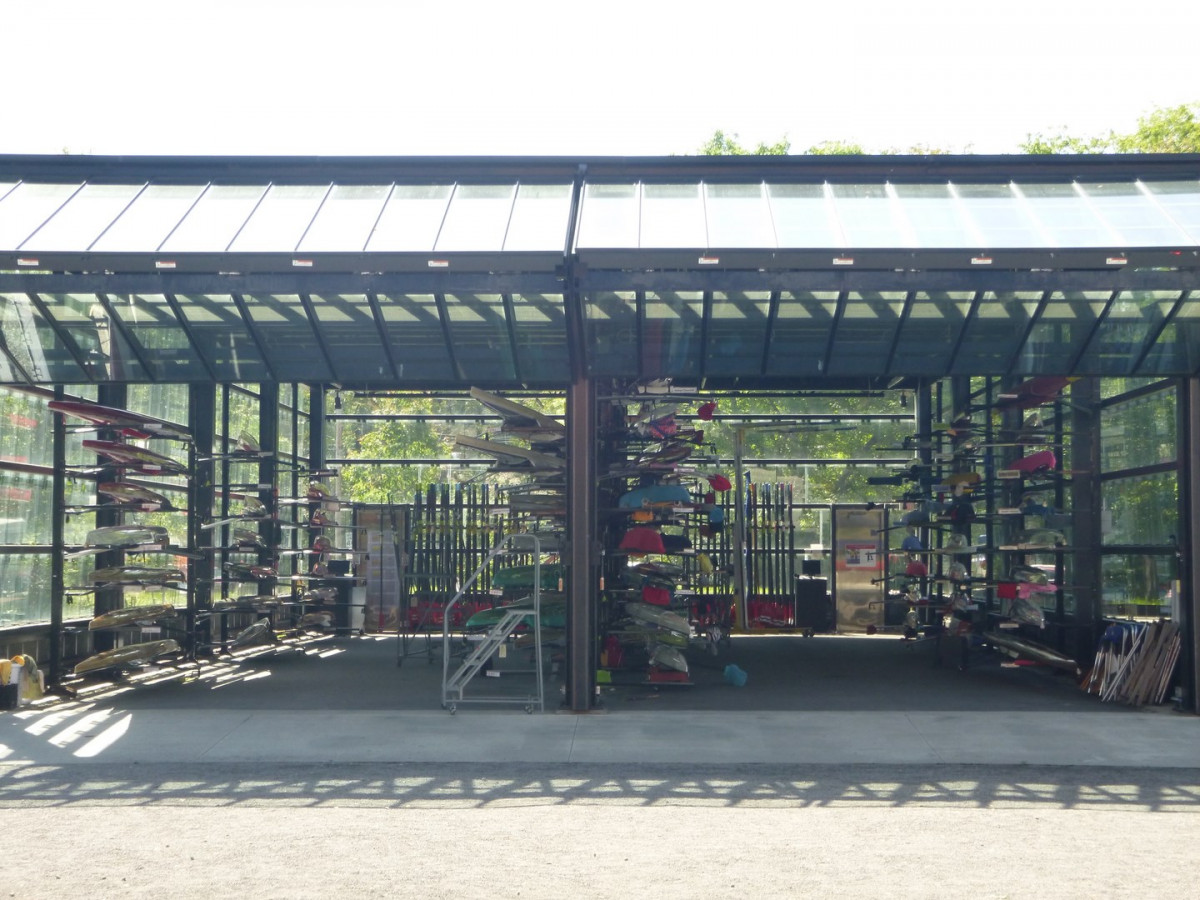 Boathouses are at their essence utilitarian. The Aussies call them sheds and some are exactly that, not an aesthetic line in sight. Others have charm, character and history perhaps with a whiff of celebrity. But a few are marvels to behold and my focus here is on six boathouses in the United States. Countless more serve rowers needs in the U.S., Canada, England, Australia and around the world. I hope you’ll share your beauties in the comment section below.

When travelling, a boathouse can serve as a place to connect with other rowers, or as a sight to see—such as the famous Boathouse Row in Philadelphia—for rowers and non-rowers alike.

Boathouse Row in Philadelphia is one of the prettiest sights to see at night. While walking or biking along the Schuylkill River, you are likely to see boat crews out on the river. Oarsmen have been sculling here since the 19th century. The boathouses are located on Kelly Drive.  Slightly upriver is a statue of Grace Kelly’s father, John B. Kelly, who was an Olympic rower and gold medalist.  At night, the boathouses are illuminated with hundreds of tiny lights, best seen from the other side of the river.

Visitors may be able to take part in some of the regattas that take place here but the cluster of 15 rowing clubs is primarily used by the crews associated with them.

Frank Lloyd Wright’s Fontana Boathouse is a gem. According to the Visit Buffalo Niagara site, Wright travelled to Europe in 1910 to share his most beloved collection of structure illustrations.

“The boathouse idea was obviously a favourite of Wright’s, featuring design elements seen in other local treasures like the Martin House and the Larkin Building – large vertical piers supporting horizontal planes. Sadly, it was never constructed. It was one of Frank Lloyd Wright’s most significant projects that had never come to fruition – until now. Completed in 2007 in Buffalo on the Niagara River, the Rowing Boathouse is open to the public for tours and available for rent for special events and meetings.”

Gorgeously designed with a roofline that captures the motions of a rower’s arms, the WMS Boathouse is located beside Clark Park in north-western Chicago. It was designed by Studio Gang Architects as a home for the Chicago Rowing Foundation, and created as part of the efforts to regenerate the Chicago River.

The Conibear Shellhouse became more popular with people dropping by after The Boys in the Boat was published in 2013, considered by some as one of the most inspiring rowing reads ever. The book celebrates the 1936 U.S. men’s Olympic eight-oar rowing team about nine working-class boys from Seattle who “stormed the rowing world, transformed the sport, and galvanized the attention of millions of Americans” according to the YouTube trailer. The team took gold in the 1936 Berlin Olympics in front of Adolf Hitler in the stands.

A 90-minute The Boys of 1936 Boathouse Tour  runs August 29th, 2017 and features both the University of Washington Rowing’s Conibear Shellhouse and the 1918 World War I airplane hangar, historical regalia, racing shells and more.  You will also get a look into the training facility and loft of the famed boat builder George Pocock. 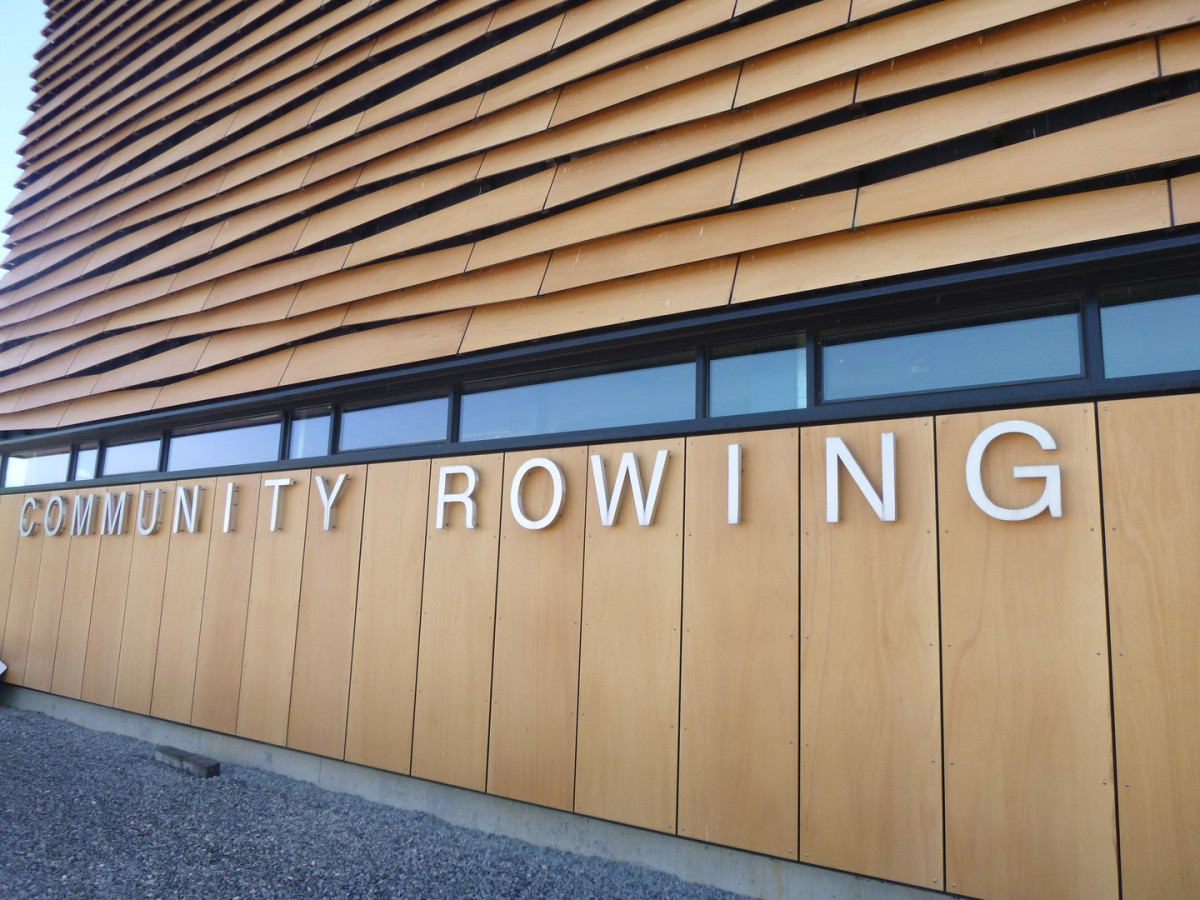 Located on the Charles River, Community Rowing Inc. (CRI) in Boston, is the city’s first public rowing club and is internationally recognized for rowing.

Whereas most boathouses have solid walls hiding the boats inside, CRI showcases the shells with clear glass panels, shimmering like a jewel within the Massachusetts park system. Another panel mimics ripples on water in this unusual and stunning boathouse.

Not only is its boathouse stunning, but its mission is too. Rowing changes lives. And that’s what CRI has been doing since 1985, becoming one of the largest rowing programs in the United States, with more than 5,000 people rowing with them every year.

Clearly, many historic or stunning boathouses line the riverbanks and lakeshores of countries around the world. Pinterest or Instagram are great places to see many more. Here is a link to 25 of the best rowing boathouses on Pinterest. Revolvy has an interesting compilation of short write-ups and pics of many boathouses along the Charles in Boston.

In closing, I leave you with this beauty of a boathouse design in Oklahoma City. Photo by Michael Stano.

Stay tuned for boathouse posts in England, Australia and other parts of the world.

If you liked this post, check out our blog!