Florence, within the ancient ring, from which
she takes the bell-sound still of terce and nones,
lived on in modesty, chasteness and peace.

Retracing Dante’s steps means setting off on a unique journey into the art, history, culture and spirituality of Florence in the mid-1300s. In this self-guided tour of Dante’s Florence, we peel back the layers of history, often in plain view of the piazzas and occasionally hidden away in the medieval backstreets. 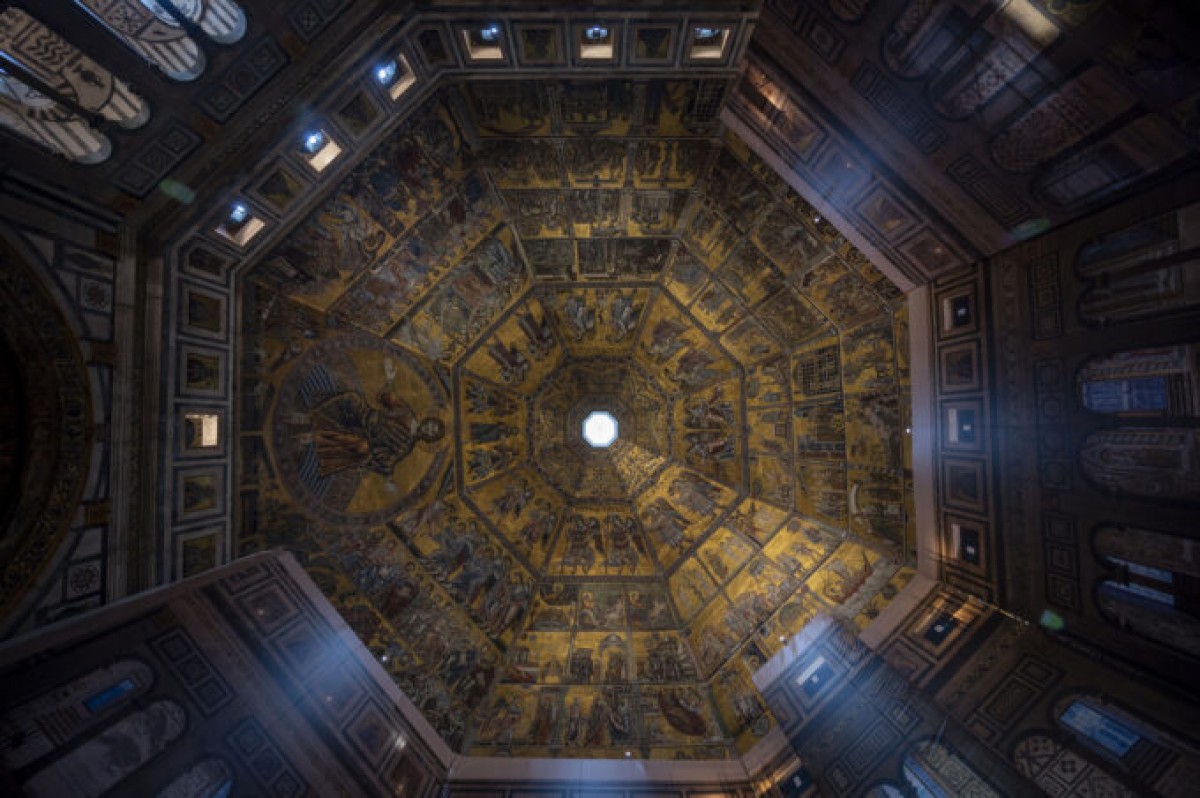 The Baptistery is our first port of call as Dante’s earliest reckoning with religion and the landmark to which he aspired to return. Born in 1265, the newborn Alighieri was baptized in his “beautiful San Giovanni” (Inferno 19: 17) on Holy Saturday of 1266. Collective christenings were commonplace, held twice a year at Pentecost and on the eve of Easter. We can marvel at Dante’s formative experience in the dazzling white and green marble octagon, seeds perhaps being sown for the ‘Divine Comedy’ by the Last Judgment adorning the mosaic firmament, whose creation began in 1225 by the Franciscan friar Jacobus. The Baptistery is the place Dante longed for the most: “I shall / return as poet, taking, at my fount / of baptism, the laurel for my crown.” (Paradise 25: 7-9). Dante never saw the completion of Santa Maria del Fiore, although he was already actively involved in the city’s political life when the first brick was laid in 1296. He was exiled in 1302 and would have been more familiar with its predecessor, the church of Santa Reparata. The cathedral was consecrated in 1436 and Domenico Michelino later frescoedThe Divine Comedy Illuminating Florence on the cathedral’s inner north wall in 1465. It shows Dante presenting his famous poem to the city of Florence with views of Hell, Mount Purgatory and Paradise all appearing in the background.

From the cathedral square, we head northwest to the thirteenth-century Dominican basilica ofSanta Maria Novella. Commedia-inspired frescoes painted by Nardo di Cione (1350–57) can be found at the end of the left transept: Last Judgment (on the back wall; including a portrait of Dante), Hell (right wall) and paradise (left wall). Giotto’s glorious Crucifix is raised high up in the centre of the nave, Christ’s life ebbing away in the same manner as Giotto obscured Cimabue’s painterly style in favour of a more natural stance: “Once, as a painter, Cimabue thought / he took the prize. Now, “Giotto”’s on all lips / and Cimabue’s fame is quite eclipsed” (Purgatory 11: 94-97). 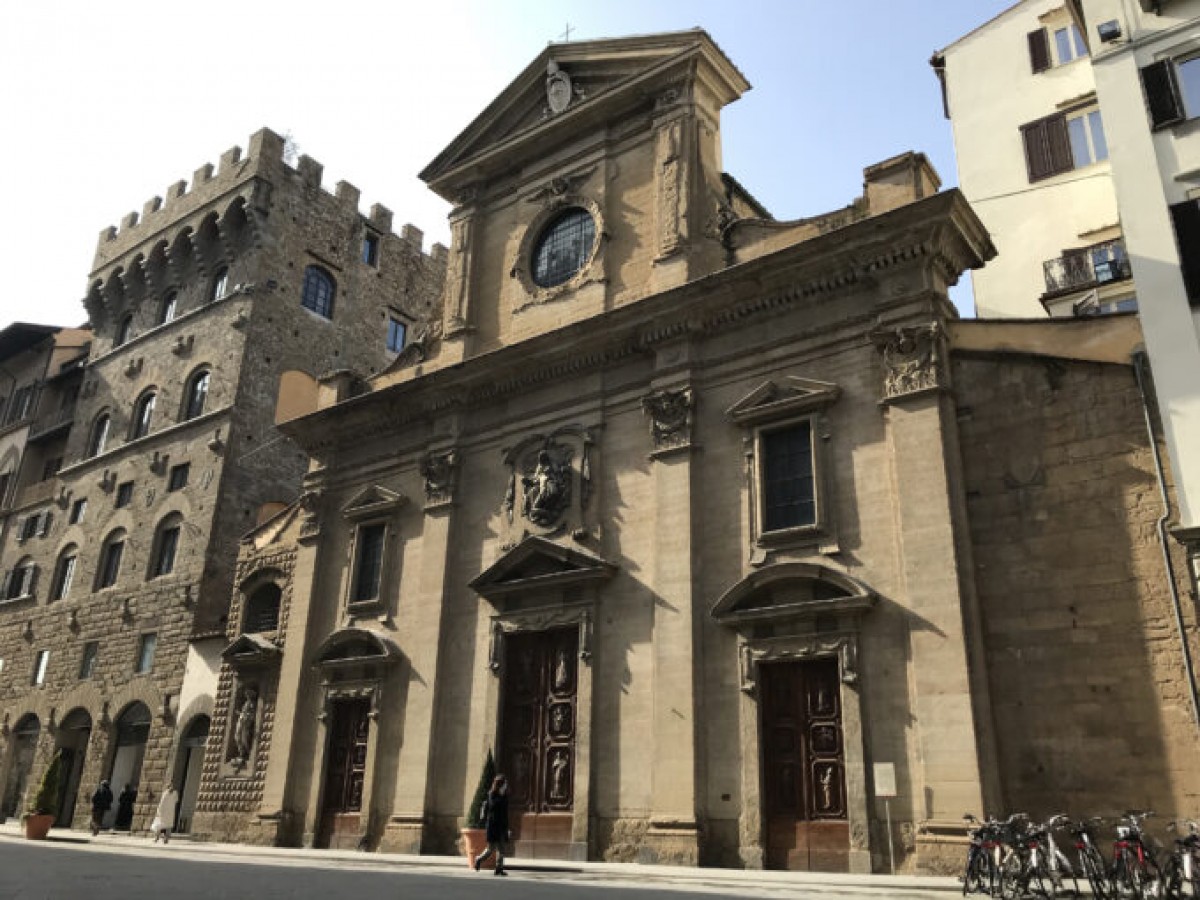 Heading towards the Arno, along today’s via de’ Tornabuoni, the now weathered sandstone-fronted basilica of Santa Trinita is believed to be where Dante’s political career began to fall apart. Formerly belonging to the Vallombrosa monks, the church was rebuilt in the Gothic style in the thirteenth and fourteenth centuries. Although there’s no historical evidence to back it up, the Ponte Santa Trinita is romanticized as being the place where Dante fell hopelessly in love with Beatrice Portinari. The love story was immortalized in Henry Holiday’s 1883 vivid painting Dante and Beatrice, on display in the Walker Art Gallery in Liverpool. 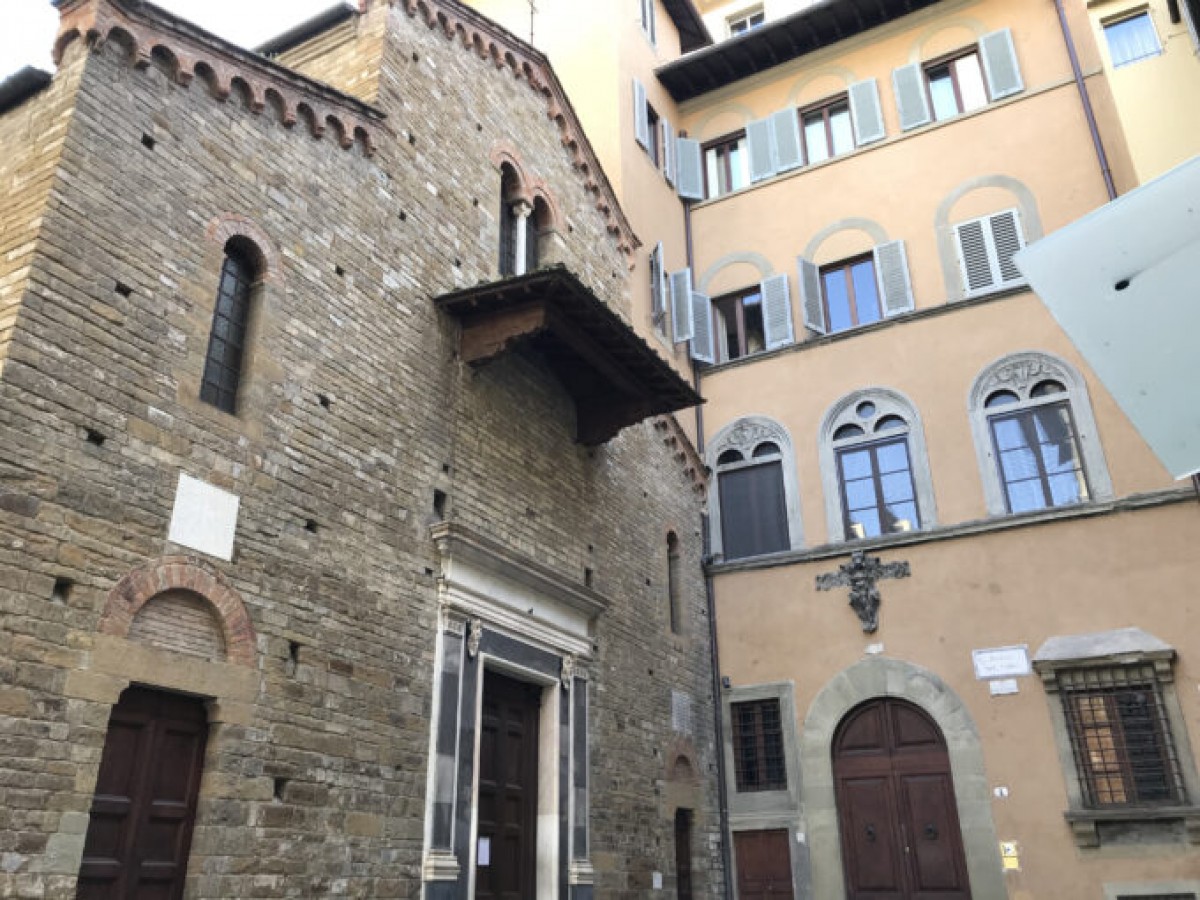 A short distance away, the tiny piazza del Limbo was originally used as the final resting place of children who had died before being baptized. Tucked in between lungarno Acciaiuoli and borgo Santi Apostoli, this cold, disquieting clearing displays a mix of styles from the Romanesque façade of the Santi Apostoli church to the far more modern. Dante echoes the feelings still elicited in this hemmed-in space, which once stood outside the city walls: “Here in the dark (where only hearing told) / there were no tears, no weeping, only sighs / that caused a trembling in the eternal air - / sighs drawn from sorrowing, although no pain … these never sinned. And some attained to merit. / But merit falls far short. None were baptized. / None passed the gate, in your belief, to faith.” (Inferno 4: 25-36) 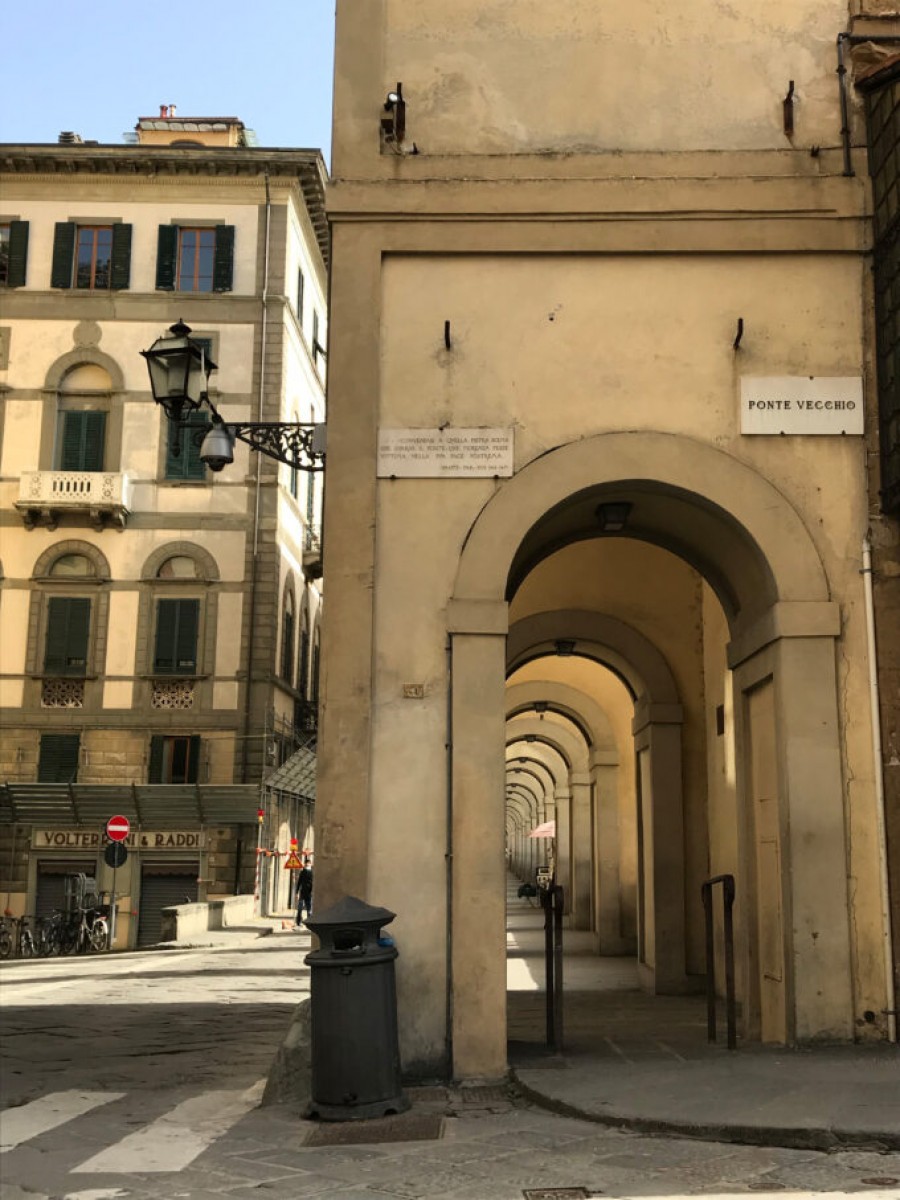 Shivers down the spine, it’s time to hurry through the chiasso Borgherini alleyway out into the Arno-side sunlight: “il fiumicel che nasce in Falterona” (Purgatory 14: 17). We walk along the lungarno Acciaiuoli, past the Ponte Vecchio, pausing to read the Dante plaque to the left before the porticoes beneath the Vasari Corridor (Paradise 16: 145-147: look it up!). Treading under the arches, we turn left into piazzale degli Uffizi to visit the pensive Carrara marble sculpture of “Dante Alligheri” by Livorno-born artist Paolo Emilio Demi, crafted in the mid-nineteenth century as one of the founding statues of illustrious Tuscans in the u-shaped corridor. 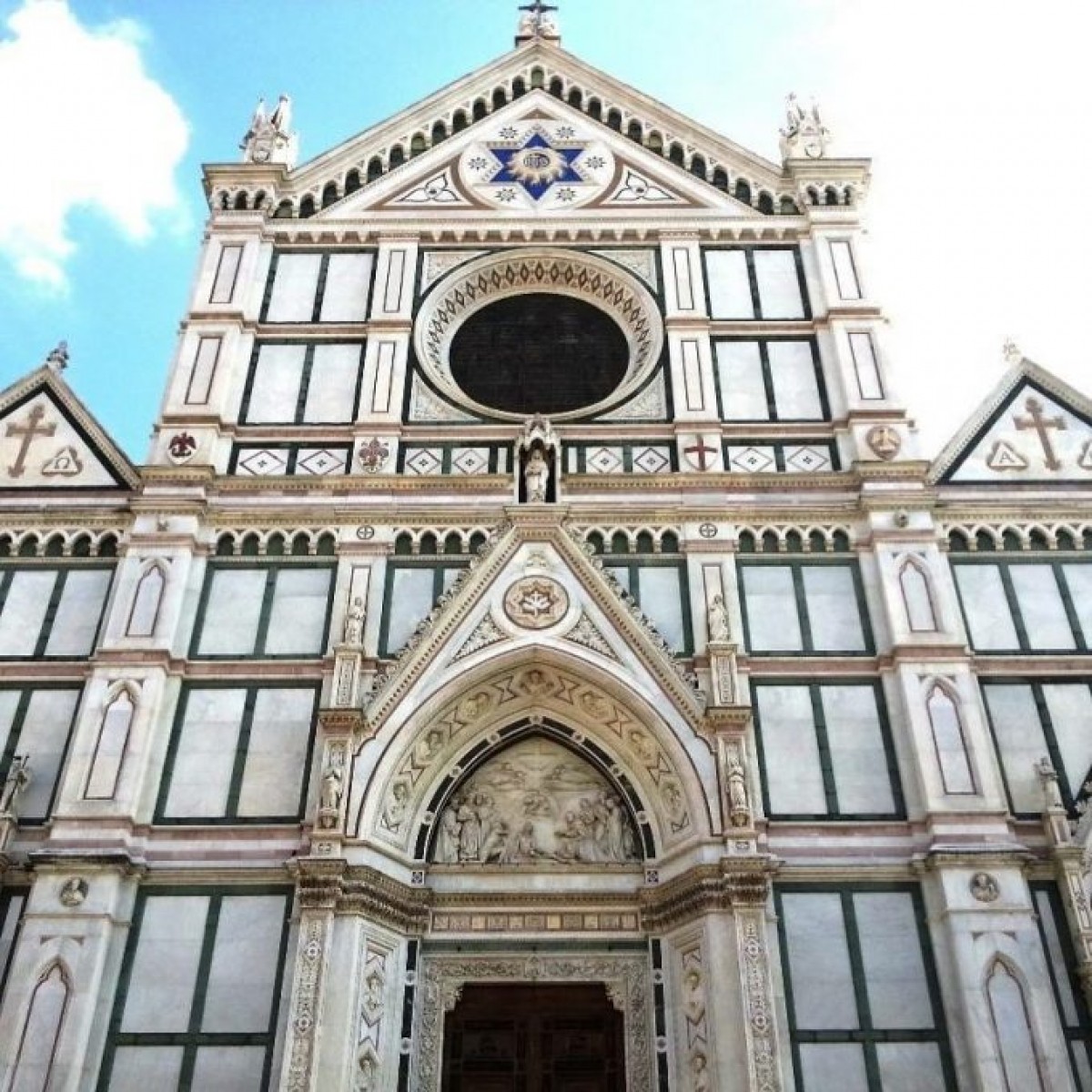 From one stone depiction of the Supreme Poet to another, piazza Santa Croce sat outside the city walls in Dante’s time. In addition to the renowned statue of the poet with a searching stare to the left of the basilica (it originally stood in the centre of the piazza), which was given to Florence by Ravenna-born sculptor Enrico Pazzi in 1865 to mark the 600th anniversary of the poet’s birth, the church also houses Stefano Ricci’s 1830 cenotaph to Dante. Inscribed with “Onorate L’Altissimo Poeta (Honor the poet held in the utmost regard), to the right the allegorical figure of Poetry mourns the loss of Dante; on the left, a crowned figure representing Italy points to the seated Dante: “‘Honour be his, the poet in the heights / His shadow now returns which had departed.’” (Inferno 4: 80-81). Despite the magnificent cenotaph, whose creation was funded by Florentines, Dante has never made it home to Florence; his remains are still in Ravenna, where he died on September 13, 1321, probably after catching malaria from a trip to Venice.

Sloping back over the stone slabs of piazza Santa Croce, we turn right and immediate left next to Teatro Verdi to walk the block that once imprisoned the city’s convicts. Erected between 1299 and 1301, Stinche Prisonwas a square building surrounded by a trench and high, windowless walls, hence the name Isola delle Stinche (Stinche Island). There was just one entrance, Porta della Miseria (Misery Gate), with the words Oportet misereri (meaning one must feel pity, in reference to how prisoners depended on the charity of individuals and not public money) above it. 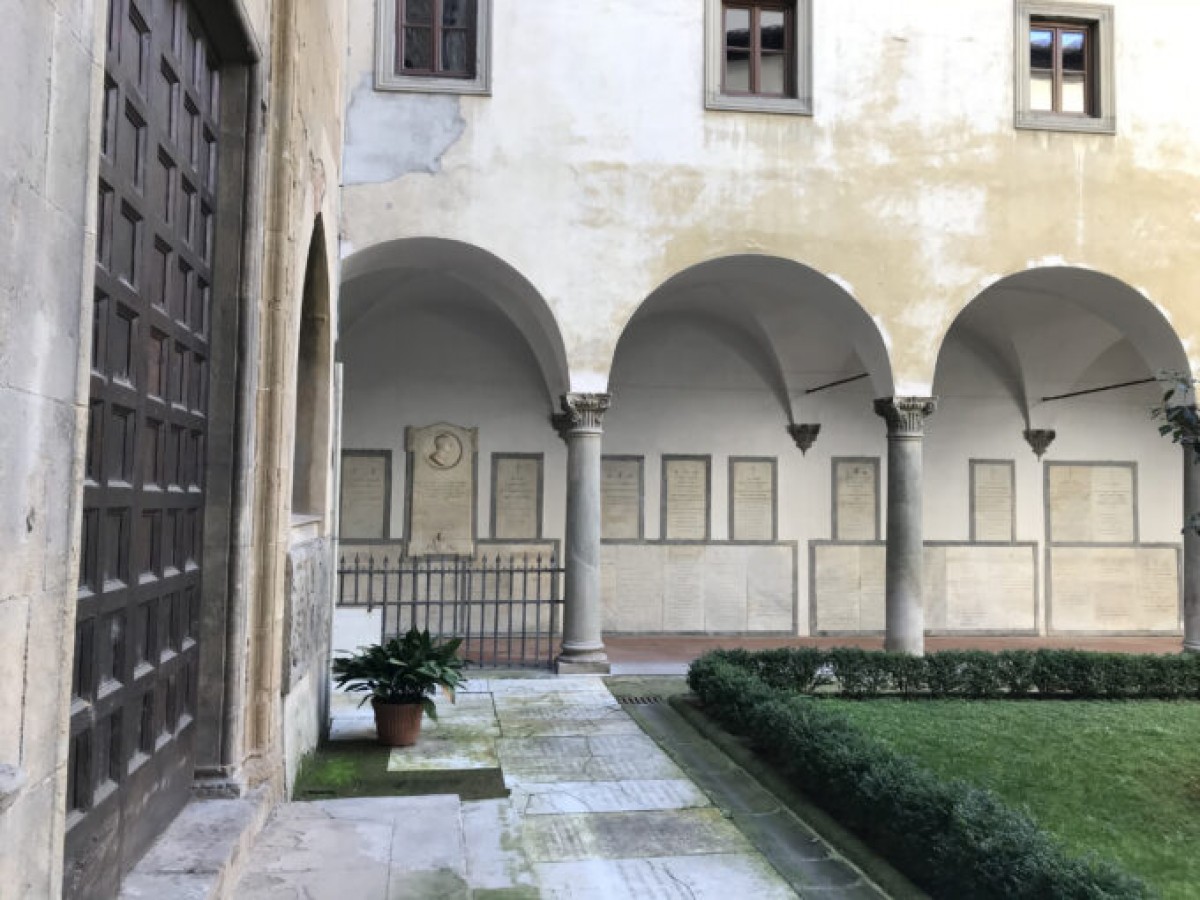 Continuing down via Ghibellina, the slender belfry of the Badia Fiorentina rises up into the heavens, the bulky Bargello on the left. Founded by Willa, Marchioness of Tuscany, in 978, her son Ugo increased his mother’s benefactions, which earned him a place in Paradiso and a Mass said for the repose of his soul every December 21. The Badia was a cultural centre too, where the monks engaged in papermaking, bookbinding and illuminating manuscripts. It’s said that the priors—Dante was a prior from June 15 to August 15, 1300, a spell that he bitterly emphasized as the start and the cause of all his misfortunes—of the Florentine Republic met here before the Palazzo dei Priori (Palazzo Vecchio) was constructed. Rumours abound that Dante might have met Beatrice at the Badia and that Boccaccio read the ‘Divine Comedy’ for the first time in public in 1373. The Badia is now managed by the monastic fraternity of Jerusalem. 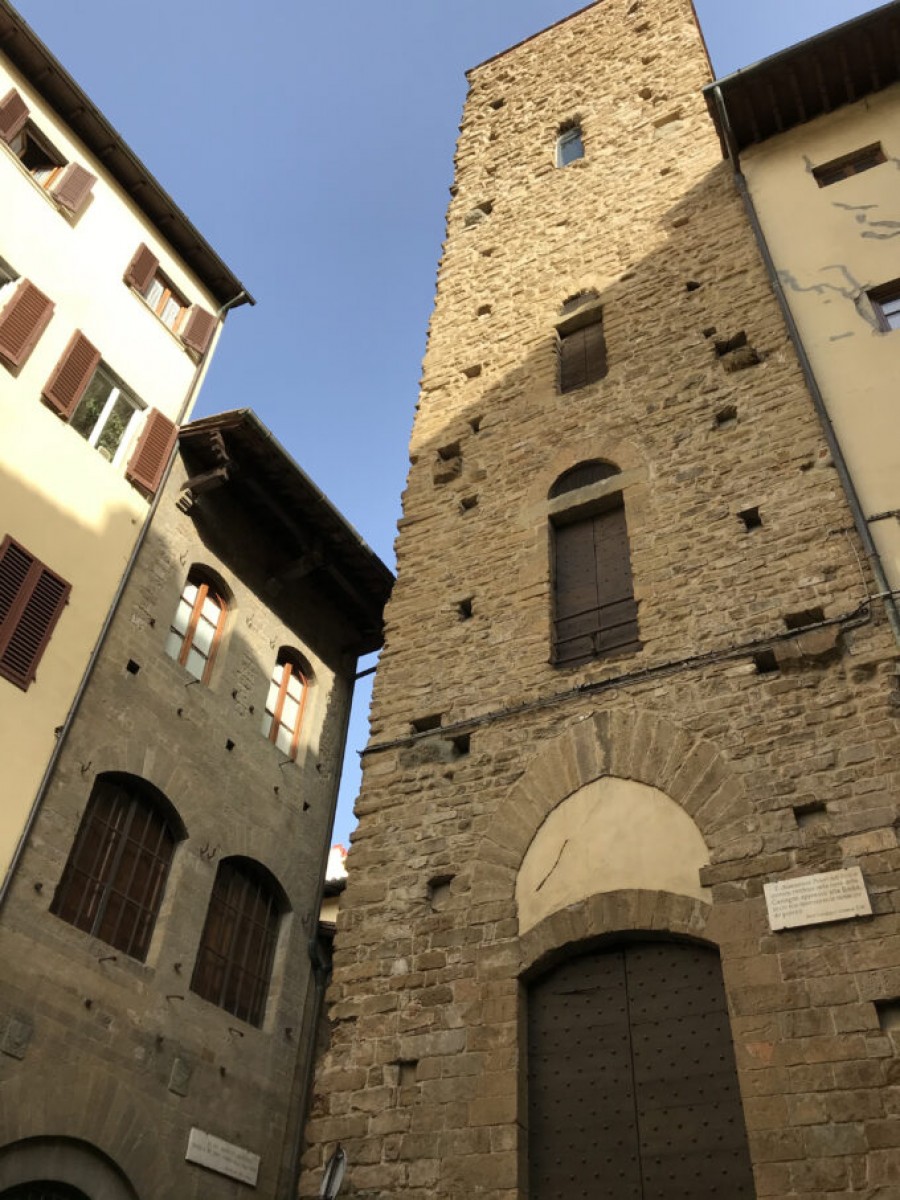 Leaving the Badia along via Dante Alighieri, we quickly find ourselves in a piazza marked with a stone engraved with “Places familiar to Dante”. In front of us, the superbly preserved Torre della Castagna stands erect squarely against a cloudless Florentine sky. A sign informs us that it was the earliest meeting place of the priors of Florence in 1282, whereas the name is believed to have come from the chestnuts that the republic’s leaders used to cast votes. Back in the piazza, another sign claims that Dante was born somewhere in this area “between the church of San Martino del Vescovo and the Donati and Mardoli houses” and specifies that the “City of Florence … built this building for the new public tribute of the divine poet”. The Dante House Museum is currently upgrading its displays with a reopening later in the year. Further down these narrow medieval backstreets, the church of Santa Margherita de’ Cerchi is marked in four languages as Dante’s Church.The unassuming place of worship is supposedly where the poet married Gemma Donati (the ceremony might equally have taken place in the nearby church of S. Martino) and is yet another of the locations where he might have set eyes on Beatrice, whose family members were buried here. It is improbable that Beatrice’s final resting place was also in this church, given her marriage to Simone dei Bardi, whose burial site is in the grand cloister of Santa Croce. Romantics and Dante enthusiasts continue to leave messages to the angelic Beatrice either tucked into the sign outside or in a basket next to her “tombstone”. 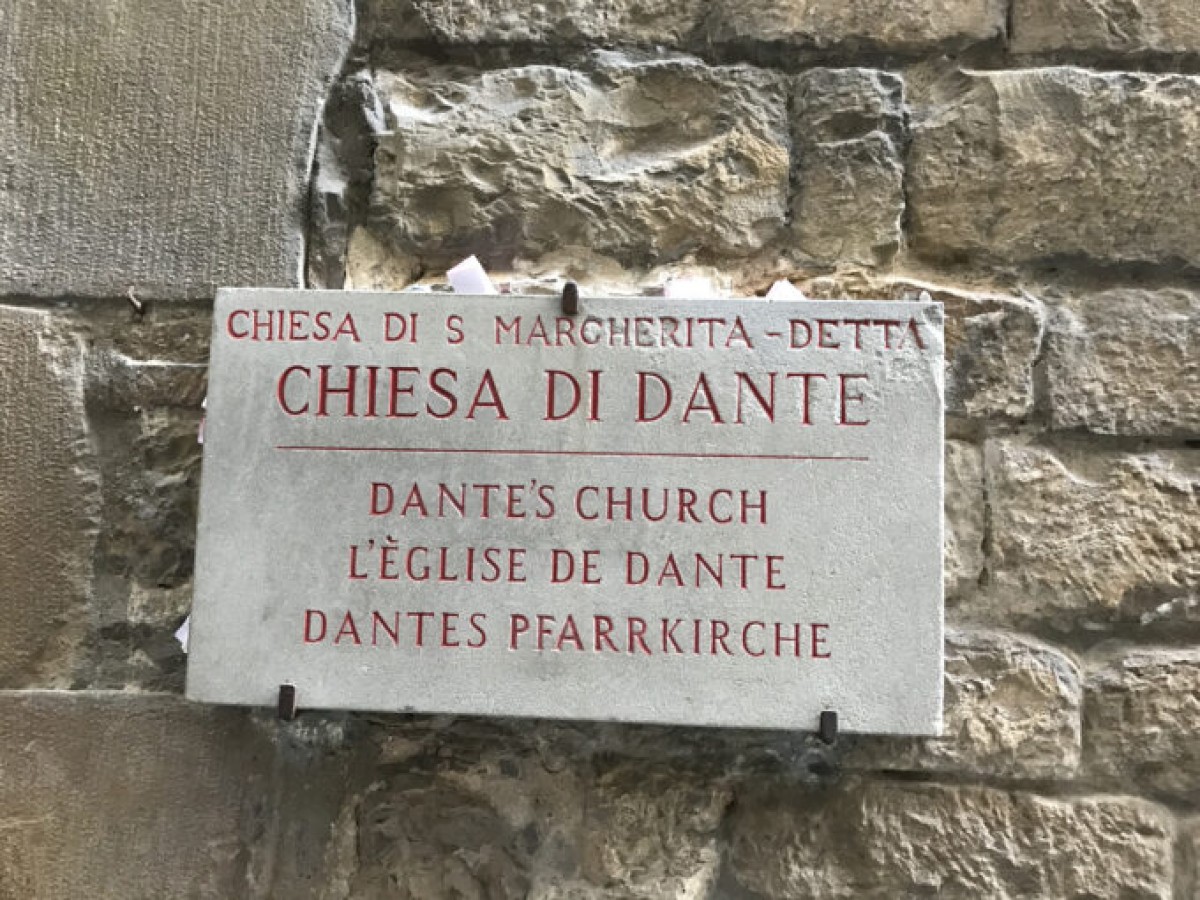 Just around the corner in via del Corso, we can see the buildings pertinent to the women in Dante’s life: Palazzo Portinari at number 16 (“seen through a veil, pure white, and olive-crowned / a lady now appeared to me. Her robe was green, her dress the colour of a living flame.” Purgatory 30: 31-33) and the dark Torre dei Donati at number 31-33 rosso (“For that place where it falls for me to live / grows, day by day, less meaty as to good, / and sets its mind on ruin and despair.” Purgatory 24: 79-81). 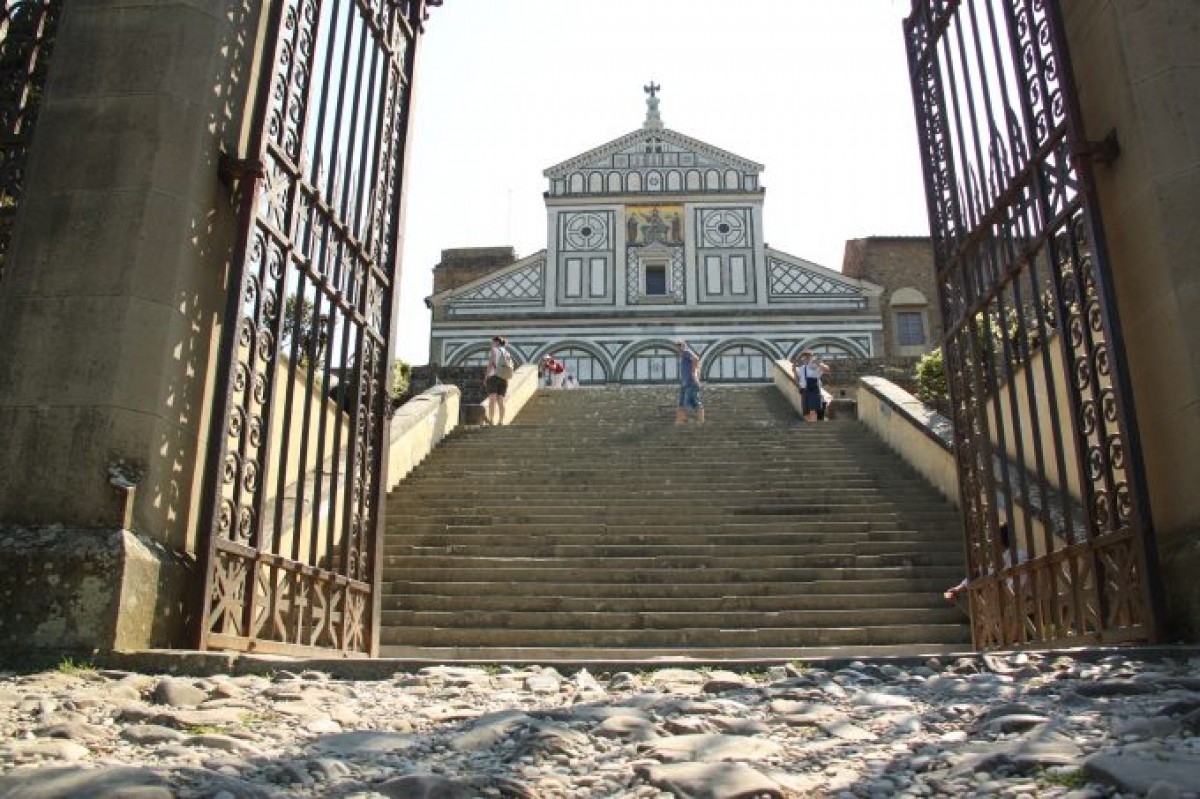 The last stop of our Dante tour requires a climb, an ascent to enlightenment. The basilica of San Miniatoal Monte is one of the finest examples of Florentine Romanesque architecture, praised by Dante in Purgatory 12 (100-105): “to scale the hill towards that church / which dominates the city (so well-ruled!) / that stands around the Rubaconte bridge, / rightwards the vaunting angle of the climb / is broken by a stairway built in times / when chronicles and balances were true.” 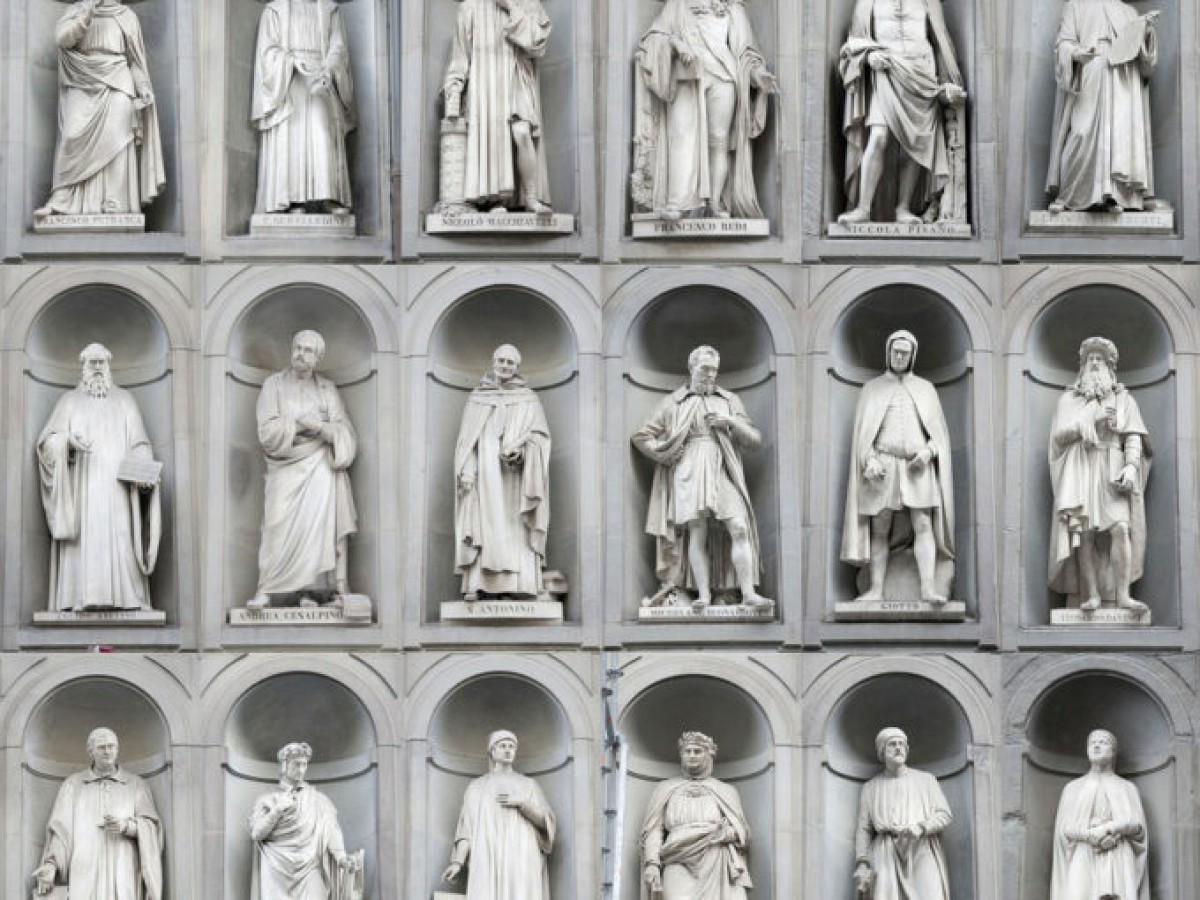 Portraits of Dante can be found in Florence in a restaurant in the old Palazzo dell’Arte dei Giudici e dei Notai (via del Proconsolo 16); in the Cappella della Maddalena at the Bargello, by Giotto and his workshop; and in the Cappellone degli Spagnoli, in the Santa Maria Novella complex, by Andrea Bonaiuti.Dante also appears in the Illustrious Men and Women fresco cycle painted by Andrea del Castagno around 1450 and now on display in the remains of the San Pier Scheraggio church at the Uffizi. Made famous by the Dan Brown’s action-packed Inferno, a copy of Dante’s death mask has been on display in the Palazzo Vecchio since 1911, but another two versions also exist: in the Bargello and the other, owned by the Società Dantesca Italiana, has been loaned to the Dante House Museum for 70 years. 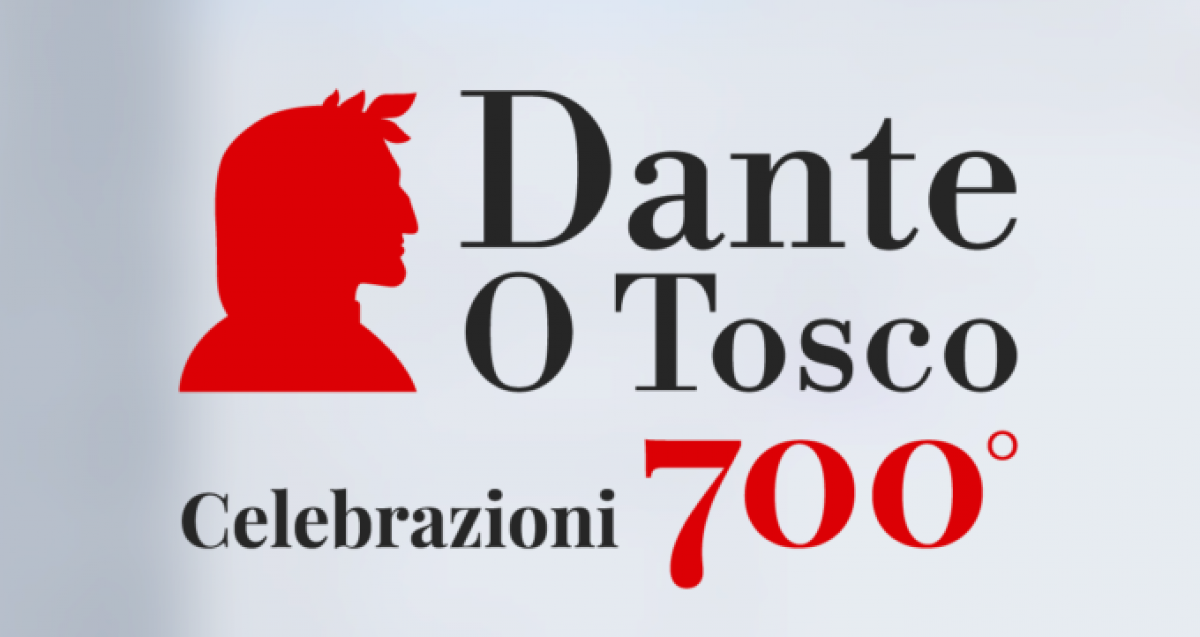 March 25 marks the day on which Dante Alighieri started to write the ‘Divine Comedy’.

For this reason, the new Dante O Tosco website will go live on Thursday, March 25. Expect events promoted by cultural associations and Tuscan towns, commercial offers, news, articles and videos about everything to do with the 700th anniversary of the Florentine poet’s death. The website will be updated throughout the year.