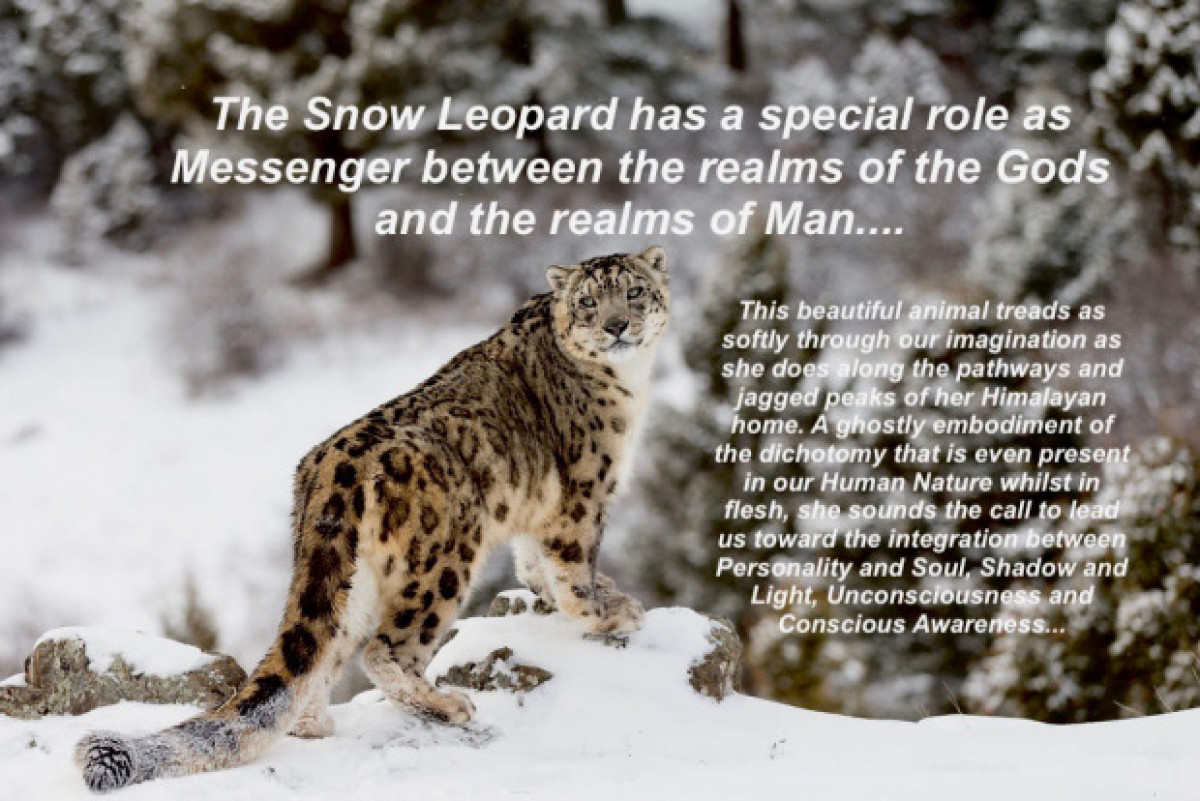 These words and the text we added to this snow leopard photo above were sent to us recently by a Snow Cat Travel client inspired by her custom tour of Nepal and Bhutan.

But, the one name that truly most befits this beautiful animal is “Ghost of the Mountains“….and that’s because they are rarely seen! And they are pretty hard to see too. More on this later…

In 25 years of trekking in the Himalayas, I’ve only ever seen a snow leopard twice!

I’m pretty certain (or at least I’d like to believe) that quite a few snow leopards have watched me and indeed many others who trek into the higher reaches of the Himalayas.

Hidden high up and from a safe, distant vantage point….just like this wonderful painting by Tenzin Norbu depicts…. 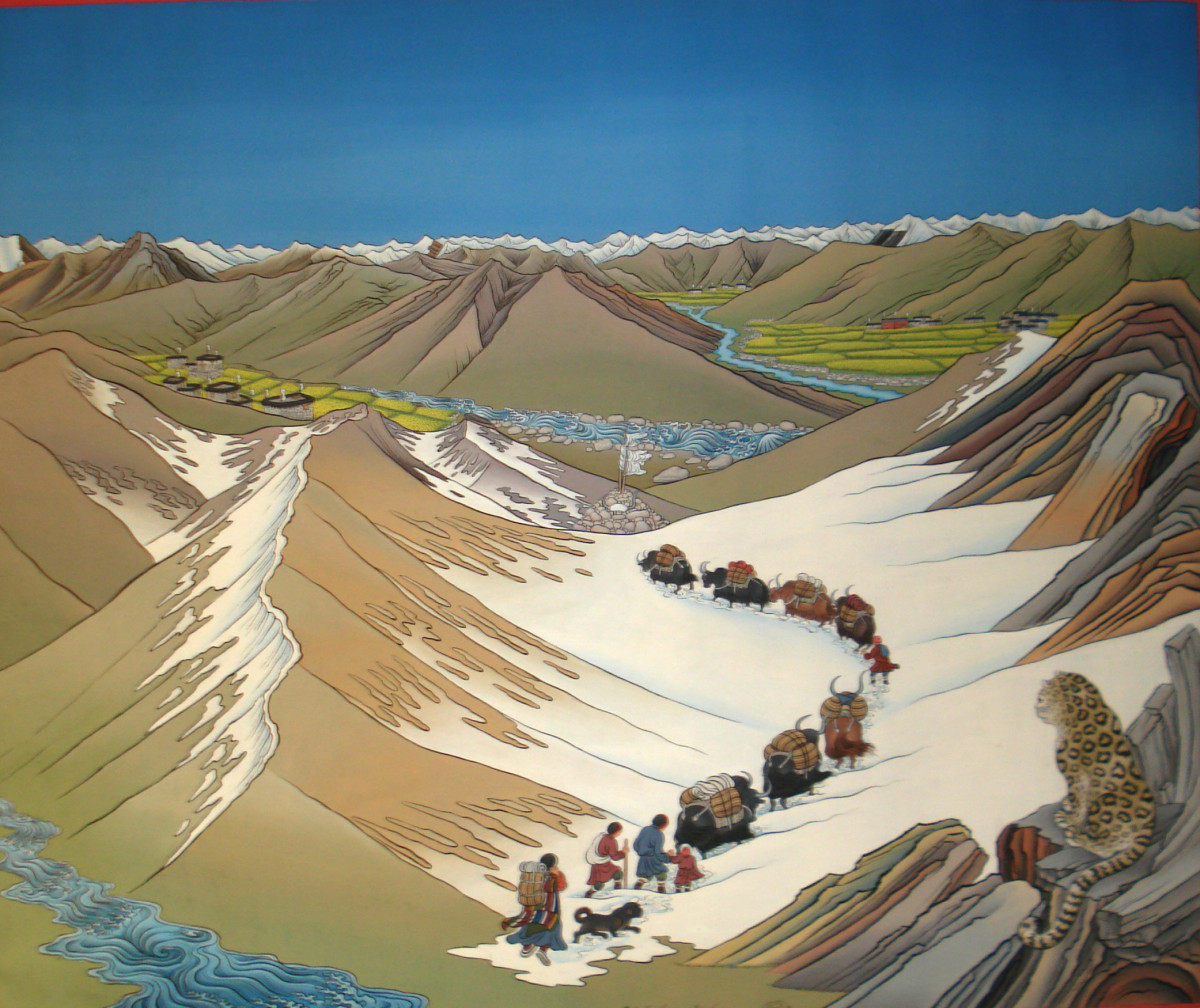 In fact the best snow leopardsighting I had was just a complete fluke. I was resting after a hard days trek in the Kangchenjunga region of Nepal….to tell the truth, I was lying on a boulder in the sun away from camp (to get a bit of peace and quiet from my trekking companions) and heard a bit of a “kerfuffle” above.

I hadn’t actually noticed that there were some Himalayan Blue Sheep (aka Bharal also quite a rarity) edging their way across the steep, scree laden mountain side…but, a snow leopard clearly had and the “kerfuffle” I heard was it giving chase, or rather the sheep making a fast getaway.

For me, the sighting was all over in a matter of a few seconds….such was the speed of the attack, prey and hunter in hot pursuit were around the hillside and gone from sight…a lot of dust kicked up and the last thing I saw was the snow leopard’s tail “swishing about”. Too far away, too sudden and all too fast to even think about “where’s my camera?”

Ghost of the Mountains

If any animal deserves this title….it’s the snow leopard. Actually “just below the snow leopard” is arguably more accurate. Of course these big cats do venture above the snow line. They have very large territories and in the Himalayas, as any high altitude trekker will tell you, you’re always likely to encounter snow in gullies, traversing slopes etc.

But, as you can see from the image above, the snow leopard’s coat affords it incredible camouflage against rocky mountain sides. Neither can a carnivore live off snow, or the leopards prey for that matter….wild sheep, goats, hares are typical of a snow leopards diet and they indeed need vegetation.

As you can see from the photo below, a snow leopard isn’t so well camouflaged against the snow.

It is of course perfectly equipped to deal with snow….large, fur coated paws, with claws for grip where necessary…..something many mountaineers wish they had!

Sorry…I digressed. Back to the “Ghost of the Mountains”. To the few and hardy people who live permanently high up in the Himalayas, they might never see a snow leopard in their entire lives. To them it was some sort of ghost….a creature of magic.

Sure, they would encounter some tell take signs…..pug marks (paw prints) in the snow….but no real knowledge of who or what made them. Snow leopard prints in the snow have long being cited as claims for the existence of the Yeti!

Related Article: How to see a Yeti…

Those that graze livestock in high alpine pastures certainly knew that something would come down from the mountains and kill some of their flock.

Nowadays, the locals now know there is such a thing as a snow leopard, but before then it was a “ghost”.

I’ve heard similar, but I was once told the tale of a village in the Upper Mustang region of Nepal, where the locals claimed that a man in their village would transform at full moon into a wildcat and then kill livestock belonging to the villagers.

It’s a great story and who doesn’t like to believe in the supernatural?

Of course the culprit was most likely a snow leopard using the additional light of the full moon and feeling bold and hungry enough for some easier pickings.

It’s only one…..but one of only a few, but just recently a very badly injured snow leopard was found in Mustang and brought to Jomsom in Nepal. Its injuries were consistent with those of a weapon….sadly it could not be saved and died.

If there is any positive over such a tragic loss…it was the outrage from many in Nepal that this had happened.

Great efforts are underway in Nepal in respect to snow leopard conservancy.

Indeed right this very minute…WWF Nepal are conducting a further study in the remote region of Dolpo. And this wonderful article below has just been published….written by a woman who has lived all her life in “Snow Leopard Country”….remote and isolated Dolpo.

This article link below really is worth a read to see how hard studying and researching snow leopards in the Himalayas is….

The Ghost and I

I’ve known “Tashi” for many years now.  Tashi was born and bred in a remote village close to a“snow leopard hotspot”. As a young boy, he grew up withsnow leopards helping his father as a shepherd, then he became a mountain guide (which is how I first knew him) and now has his own established trekking business.

He tells me that the best way to protect the snow leopard is to get the local people on board.

He firmly advocates that through education the local people grow to value the fact that they have snow leopards “on their doorstep” and that as such it’s a privilege not something to fear. Harmony in co-existence.

But, you can’t expect a livestock herder already living off maybe less than $1 a day to be happy that he is losing his livestock and therefore his livelihood. If something is threatening your livelihood, surely you’d do something about it?

Here compensation plays a part and thus to reduce the number of snow leopards being killed due to human conflict and retribution killings efforts are being made to compensate herdersfor any losses due to snow leopards. A sort of insurance fund.

But, more importantly herders are being educated as to how to better protect their livestockfrom a snow leopard attack, in the form of fortified corals.

Not only that, but it’s common sense that if there is a healthy abundance of wild prey for the snow leopard to hunt, it’s less likely to prey on livestock. This is an apex predator after all.

Poaching, as with many wild animals is a problem and the snow leopard is no exception.

Then there is snow leopard tourism.

Just how can you see a wild snow leopard?

Well, snow leopard watching has already started to enter the arena of tourism. I’m well aware that some of the big adventure tour operators offer as such in places like Ladakh and Mongolia. The terrain in both lend themselves better to 4WD access, as well as the snow leopards often being found at lower altitudes than in Nepal, as the permanent snow line in Nepal is often around 17,000 feet.

Tourism if managed responsibly can be of great benefit.

However, in the Nepal Himalayas there is no easy way as to how you can see a wild snow leopard. Basically you have to purposefully go and look for it!

That’s easy to say. Much, much harder to do in practice. It means venturing into the high and remote ramparts of the mountains. This is the realm of the snow leopard. You’re looking at some very challenging, high-altitude trekking and seriously wild camping and all with that bitter, bitter cold.

Safe to say, it’s not for everyone. That’s probably not a bad thing. You also need deep pockets too, such an expedition is going to be very costly and there is NO GUARANTEE that you will see a wild snow leopard.

Consequently an element of “it depends” is an important factor. A lot of hard work and also a lot of luck and good fortune too. Most serious wildlife watching enthusiasts know this all too well.

You’ve probably seen the “how we filmed it” sort of thing that accompanies most TV wildlife documentaries, and in the case of snow leopards the poor camera man left to freeze for endless days/weeks in a wildlife hide and no sign of a snow leopard….probably no signs of any other life!

So, a pre-planned  “a to b to c to d” trek is neither use nor ornament.

Time is needed. Time to first get into the Himalayas (not easy), time to then trek into “snow leopard country”, time to acclimatise as those pesky snow leopards are used to the high altitudes….your body isn’t……and time to look for signs and as any wildlife watcher knows a lot of time waiting and searching and more often than not nothing happens.

The “Ghost of the Mountains” doesn’t appear by magic and it may well be the most miserable, harsh conditions you’ve endured in your life as you’re not designed to live in the realm of the snow leopard….but, the snow leopard most certainly is!

Now it just so happens that as Snow Cat Travel we do “sorta kinda” operate snow leopard treks. But, don’t misconstrue this as “an advert for snow leopard treks”….we’re not talking big business here…...very few people have that combination of financial resource, time and the desire to endure physical hardship…..and quite possibly with no results..…that’s searching for snow leopards for you. Actually we are very selective …only two very small private parties a year….oh and with rules and conditions too.

Chances are we’ll say “no”.

I’m not saying where in Nepal…..no second guessing…..it’s not Dolpo and it’s not Kangchenjunga.

Another name, although rarely used, for the snow leopard is “The Ounce”

Nepal has an estimated population of 300-500 snow leopards, which is actually more than the number of tigers in Nepal (current estimate 235)

There’s no record of a snow leopard ever killing a human.

A snow leopards range can be up to 1,000km2….no wonder they are so hard to find!

Climate change is possibly the greatest long term threat to the snow leopard.

Snow leopards are most active at dawn and dusk.

There’s a “snow leopard vodka”.…15% of all profits being donated to the Snow Leopard Trust.