Legend has it that the seven islands comprising the Tuscan Archipelago were birthed when Aphrodite mislaid her pearl necklace in the Mediterranean. Goddess of love aside, Elba, Capraia, Pianosa, Giglio, Montecristo, Gorgona and Giannutri shimmer with astonishing nature, mind-blowing geology and myriad activities for outdoor adventures.

As the ferry leaves the tourist port of San Vincenzo on the Italian mainland under the watchful gaze of Giampaolo Talani’s seven-foot-tall sailor statue, the two-hour cruise into the blue transports wannabe adventurers to Capraia, a striking rock interrupting the blue sea-sky continuum. We strapped on our hiking boots and headed up the steepest of inclines through the archway to the former penal colony. From the hefty dry stone walls to the considered castle crenellations and impressive ex-cell block, the island’s prisoners shaped Capraia’s landscape forever during its hard labour years from 1873 to 1986. 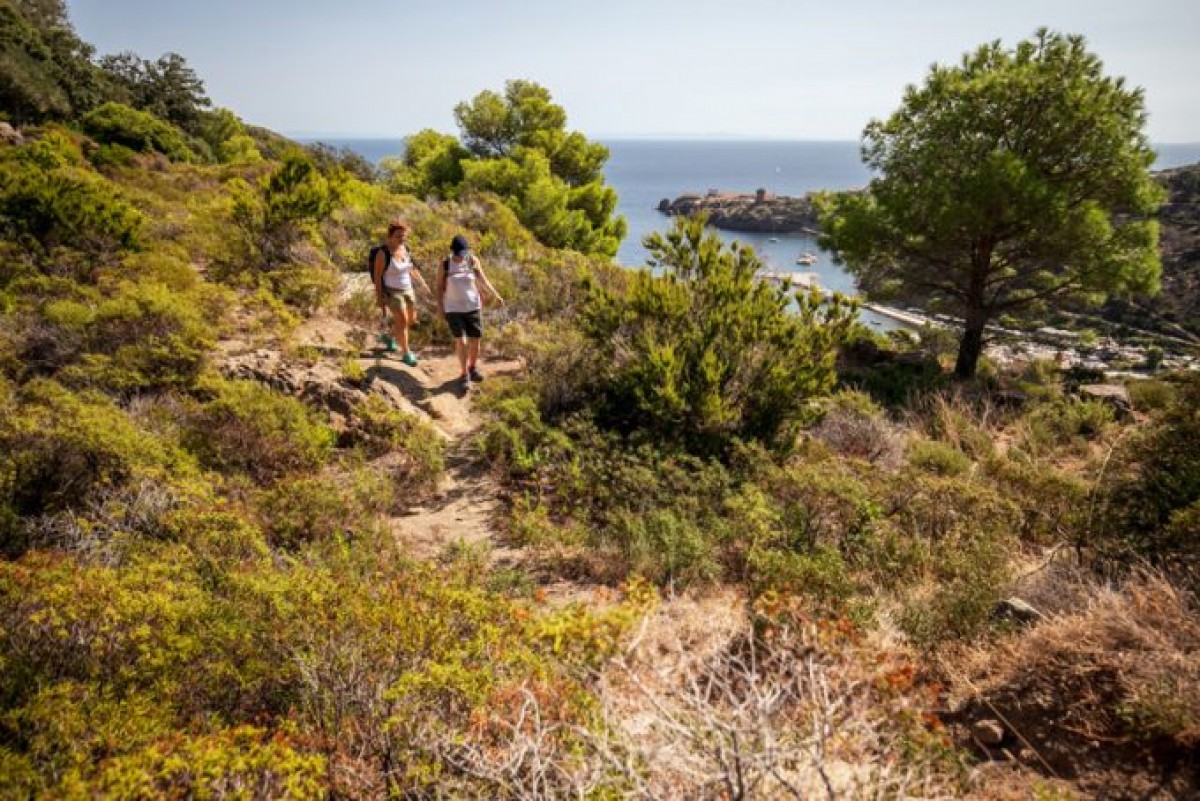 A sweet-scented isle, native herbs, from lovage to helichrysum, scatter the scenery, reappearing in the island’s local specialities: lotions and potions at the portside pharmacy, beer and liqueurs, honey, jams and cheeses. Cacti and pine cones line the narrow gravel track to the island’s only agriturismo, where Milanese transplant Rosanna and her Marina di Pisa husband Massimo embrace island living. “You realise you’re on an island the moment the boat leaves.”As the ferry leaves the tourist port of San Vincenzo on the Italian mainland under the watchful gaze of Giampaolo Talani’s seven-foot-tall sailor statue, the two-hour cruise into the blue transports wannabe adventurers to Capraia, a striking rock interrupting the blue sea-sky continuum. We strapped on our hiking boots and headed up the steepest of inclines through the archway to the former penal colony. From the hefty dry stone walls to the considered castle crenellations and impressive ex-cell block, the island’s prisoners shaped Capraia’s landscape forever during its hard labour years from 1873 to 1986.

This mesmerizing isle of blues and greens only reveals its true soul by boat. Volcanic pillars and sandstone arches frame minute coves and massive cliff faces that change dramatically around the coastline. The volcanic red layers of Cala Rossa strike an unforgettable contrast with the glassy aquamarine depths. It’s a favourite among divers and snorkellers, who plunge with mask and tube into the seemingly shallow sea (it’s deeper than you think) to swim surrounded by darting shoals and shimmering seagrass. 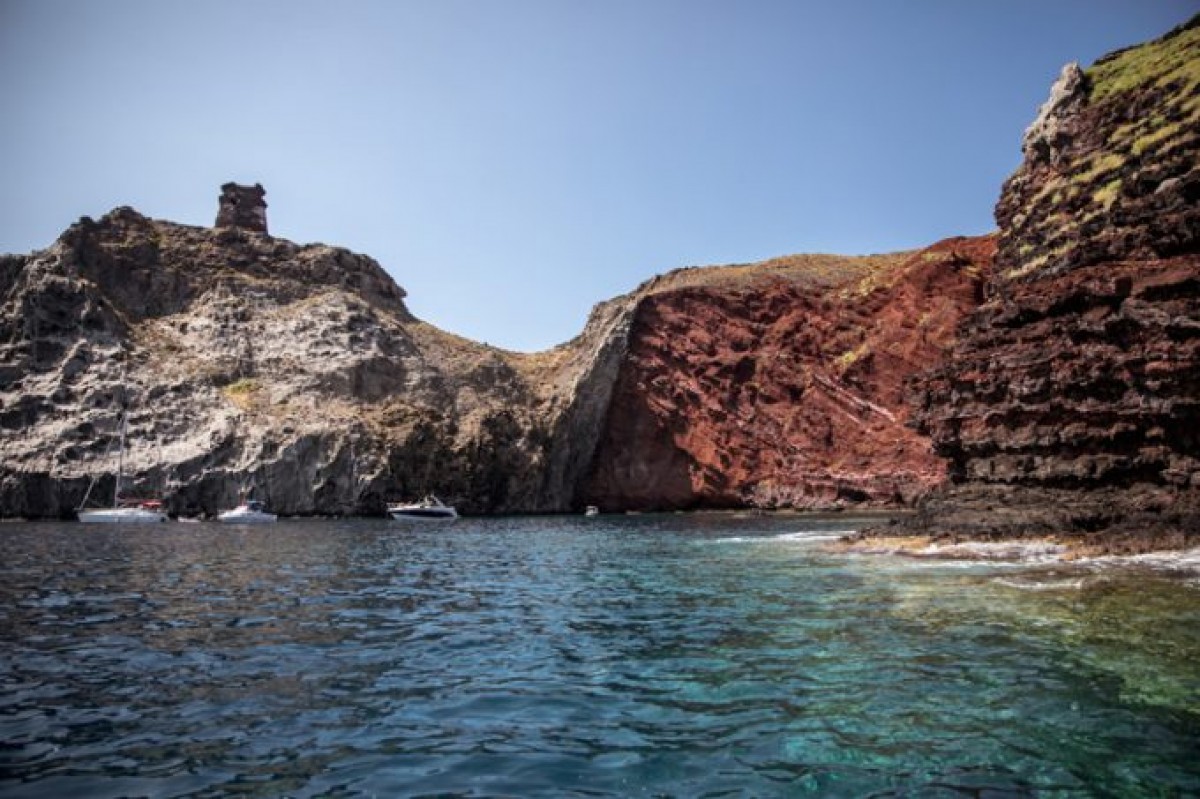 “I came to Capraia to go fishing and landed the biggest fish of all,” twinkly-eyed boatman Luciano explained as a non-islander how he met his Capraiese wife. “The island gives us incredible light and shade, and the most memorable experiences.” To this, we should add the famous Sagra del Totano, an annual autumnal highlight—this year’s squid festival will take place from November 1 to 4.

All of a sudden, still in the rented raft, our Tuscan Archipelago National Park guide let out an excited whoop as an osprey made a rare fly-by. Wings regally silhouetted against the cloudless sky, the sea hawk soared from its clifftop perch to the opposite crag before vanishing out of view. Shaped by human labour and undisturbed nature, exploring the coastline and core of Capraia is an oceanographer’s dream and an adventurer’s paradise.

“In Dante’s words, we are mere Charons. The guides will join us ferrymen at Marina di Campo,” announced the captain of the Neptune amid chuckles during a perfect passage from Piombino to Pianosa. Wispy clouds whisked discerning day-trippers to the small island southwest of Elba. First stop is the visitors’ centre and museum, the engine room of the islet’s activities and key to understanding the 10 square kilometres of this fascinating Tuscan outcrop. Reserve a small-group sea kayaking session starting on Cala Giovanna beach escorted by an instructor who imparts paddling tips while explaining Pianosa’s protected nature reserve during the 2.5-hour tour. (If you manage to score a bed for the night in the island’s only 11-room hotel, Cala Giovanna is the nocturnal hangout as dozens of barracuda dance in the cove.) A treasure trove of marine flora and fauna, Cala dei Turchi appeals to snorkellers, wowed by the millennial-old shell fossils and ceaseless marine erosion while waving at friendly grouper fish, black-edged saddled seabream and docile stingrays. 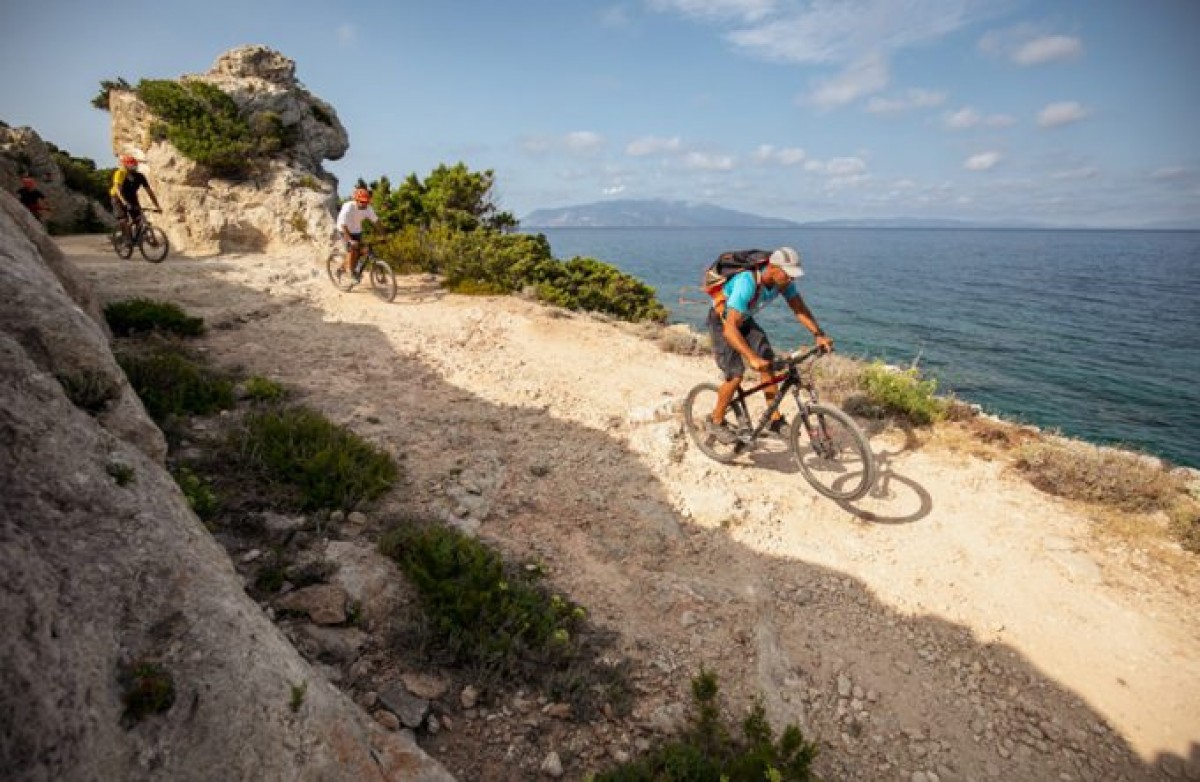 If you’re more of a land lover, two-wheel enthusiasts are in for a treat cycling along the flat sandy trails dotted with dense Mediterranean scrub as far as the former Marchese sanatorium at the northernmost point of the island, while aspiring archaeologists, paleontologists and the simply curious are left flabbergasted during guided hikes to sight fossils dating back two million years along the Punta Libeccio, a sudden sheer drop down to the sea. The Tower of Babel is another oddity, clambering up the centuries-old crazy block steps of the circular mass at the centre of the isle to understand the flatness of Pianosa and the reason behind its name (piano means “flat”), as too are the mind-boggling catacombs, managed by the Vatican, whose sprawling subterranean chambers were once the burial ground for the island’s earliest Christian populace in the late fourth century—as well as the ex-prison warden’s cellars.

Pianosa still operates as an open prison, despite all the derelict buildings from its 140 years as a penal colony between 1858 and 1998, including the ghostly central office block that was completed just before orders were received to close down the facility. Twenty-two prisoners now live and work year-round on the island in Pianosa’s only restaurant and in the vegetable gardens where prison guard Claudio humbly displays his inmates’ proud work: immaculate rows of chilli peppers, melons and tomatoes that taste of the sea, salt and sand; boxes of the day’s pick ready for delivery to five-star Hotel Hermitage on Elba Island; a well-kept kitchen that anyone can book for a simple lunch made from the orto’s fruit and vegetables. The vegetable garden is a success story, although as Claudio sagely commented, “We’re not here to make money; it’s about giving the inmates a purpose and an education.”

A wild and wonderful place, Pianosa works its magic long after you’ve left its crystalline shores, adventure after adventure into the unknown, the untouchable and unimaginable. Catching the ferry home is a bittersweet journey made jovial by that “funny” captain, an accurate self-definition.

The largest of the Tuscan Islands offers countless adventures, from windsurfing and kayaking to hiking and mountain biking, plus snorkelling and diving.

Plunge into the emerald water for a scuba diving experience among monkfish, barracuda and eels or go hiking into the wild along well-signposted scenic mule tracks.

Hike to the island’s Roman villa before diving into the pristine sea to explore the 11 kilometres of coastline carved by the elements.

Get your name on the waiting list as only 1,000 visitors are allowed on the island every year. Apply here. Once you get the green light, the adventure lies in getting there (there’s no ferry service) and in the escorted hiking.

The smallest island is closed to visitors this year, but it’s expected to reopen next spring (capped at 75 visitors per day), complete with ferry service. It’s managed by the Italian prison system.

For Pianosa, ferries leave from Piombino (2 hour journey).
Check out Tuscany Adventure Times on Facebook and Instagram. For more information about the islands, see www.islepark.it.