The Magic Of The Murray River Walk

It’s pouring rain when I start my journey towards Renmark, a small town three hours east of Adelaide. Even though my field of vision is partially obscured by the pelting raindrops, I can still make out the vivid orange of citrus orchards, vast fields punctuated by wild emus, and white blossoms emerging on almond trees. 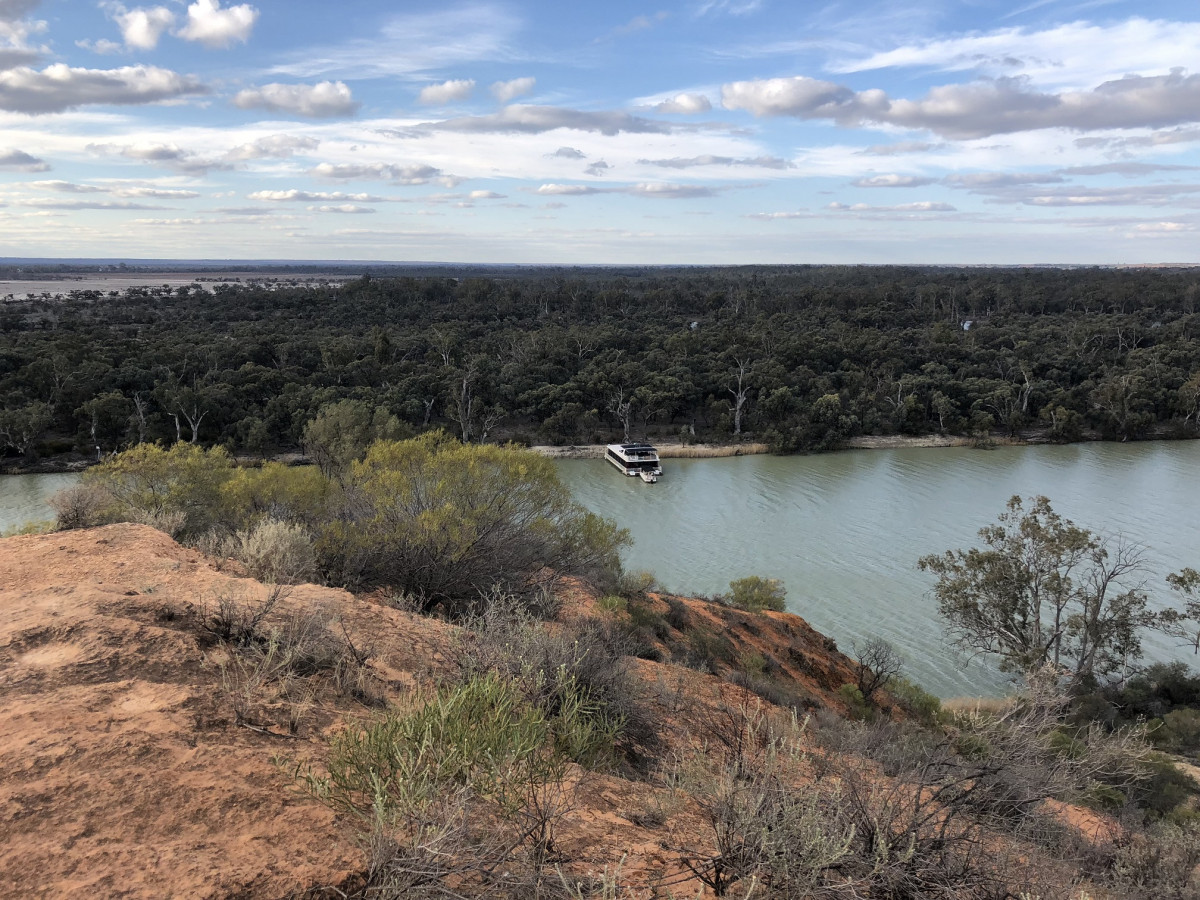 Given the downpour, it’s difficult to believe that Australia is on the precipice of what’s predicted to be the worst drought in decades. My first sighting of the Murray River, a wide milky-green stretch of water, makes it all that much harder to comprehend. Once an ephemeral body of water, the Murray was permanently flooded by a locks system in the 1920s. It’s now the third-longest navigable river in the world, surpassed by only the Amazon and the Nile in length.

“Even in times of drought, it gives you a sense of security,” says my driver, Tony Townsend. “The river has been the lifeblood of European settlement from when it was first used for irrigation in the 1880s until now—and for the indigenous communities, long before that.”

Understanding the river’s impact on the area’s history and culture is exactly the ethos behind the Murray River Walk—and the reason I’ve travelled to the heart of the Riverland region. 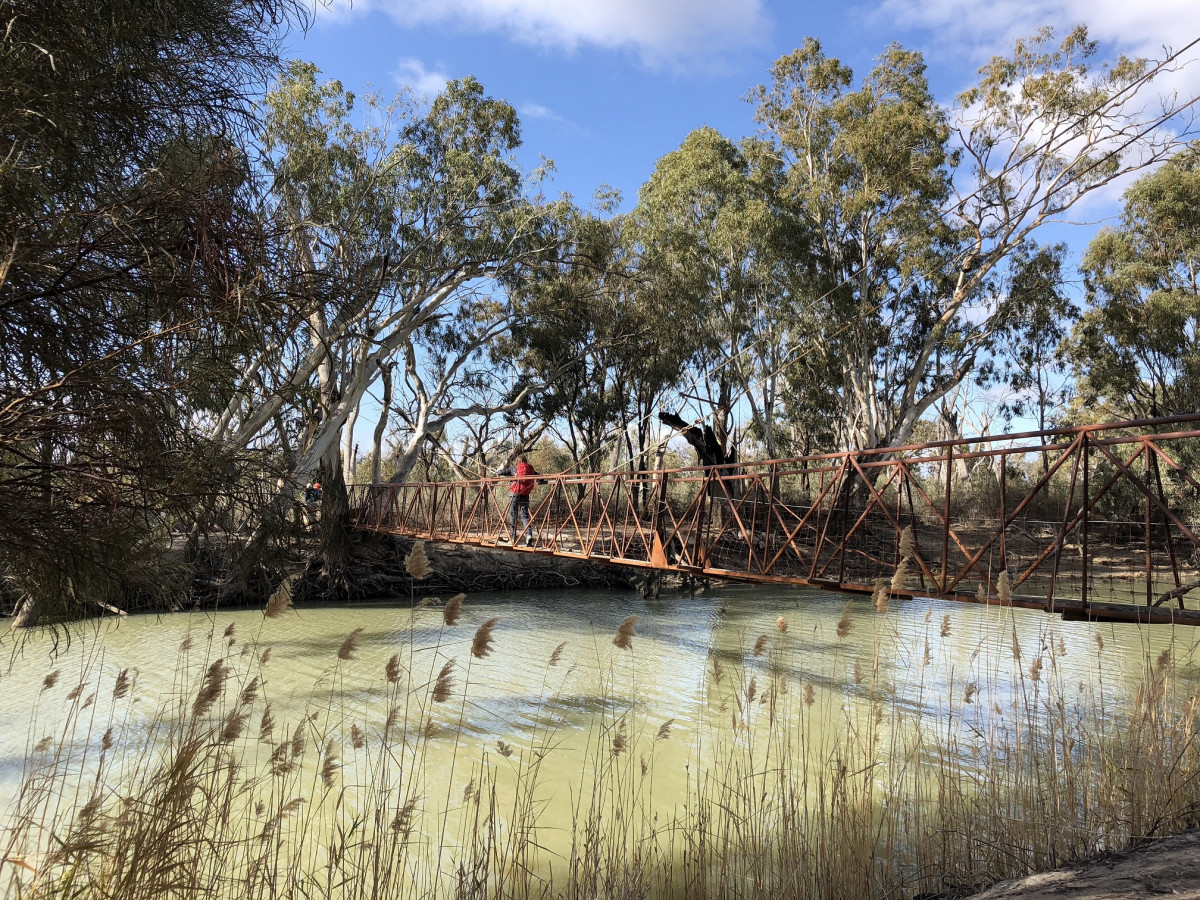 The 40-kilometre bushwalk was started by local Tony Sharley in 2016. After more than 10 years working for nearby Banrock Station—where he contributed to 100 conservation initiatives worldwide as part of the winery’s corporate social responsibility project—Sharley wanted to launch an eco-tourism initiative that would showcase the Riverland. To be part of the Great Walks of Australia collection, he knew it would have to be guided, eco-certified, offer exclusive accommodation, and provide exceptional food and wine experiences.

On the Murray River Walk, guests spend three nights aboard a houseboat and are treated to locally sourced wine, beer and food. (Think roast Murray cod crusted with lemon myrtle parmesan; bread pudding made with Riverland-grown oranges; or kangaroo served osso bucco-style.) But it’s the “guided” portion that Sharley’s team really excels at. Drawing on his experience in aquatic biology, Sharley charted out the walk to highlight spots of ecological and historical significance.

The result is a journey that doesn’t just follow the river’s shores, but winds around the adjoining backwater creeks and lagoons, providing insight into the lives of Aboriginals, early European settlers, and the farmers who now call the area home. With stops at places like Wooleneck Bend (where the remains on a World War II internment camp are hidden deep in the bush) and Bunyip Reach (the proposed site of a controversial 1960s damming project), the overall effect is more “fun school field trip” than “gruelling hike.” 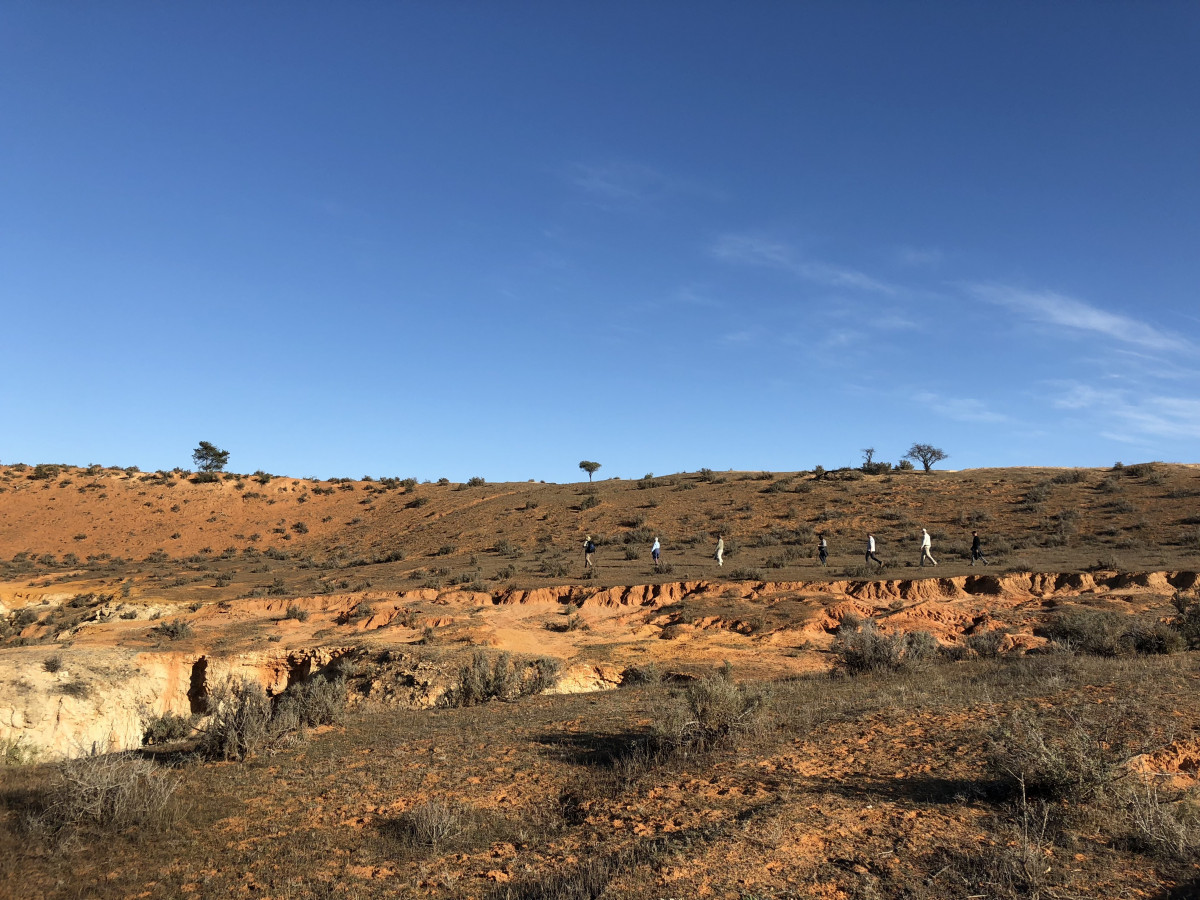 One day at lunch, Sharley and I discuss his plans to potentially start a hospitality training program for local youth, and why he decided to create a land-based tour in a place best known for waterskiing and houseboating.

I get a better sense of this when I set out on the water with Ruth Roberts, who completed a solo paddle of the Murray’s full 2,508 kilometres from mouth-to-sea in 2013. The co-owner of outfitter Canoe the Riverland, she now has a private put-in spot along Plummers Creek, from which she can access the river on a daily basis.

The Murray, she tells me, makes her feel like a child again.

“When I’m on the river, I feel like I’m part of it,” she says, pausing only to watch egrets and darters spreading their wings to dry on nearby river red gums. While currently under-utilized by paddlers, Roberts says that the river is particularly accessible for novices, with calm waters and dozens of backchannels to explore.

Soon, it will be easier for independent adventurers to do just that. This year, work has started on the Murray River Adventure Trail, a long-distance multi-sport path in Victoria and New South Wales. The completed trail will offer over 1,000 kilometres by land and nearly 1,400 kilometres by water.

“It will be the longest trail of its kind in the world,” says Mark Francis, CEO of Murray Regional Tourism. In addition to providing new ways to access the waterway by foot, bicycle, kayak and canoe, the trail will also help to manage sensitive ecological areas. 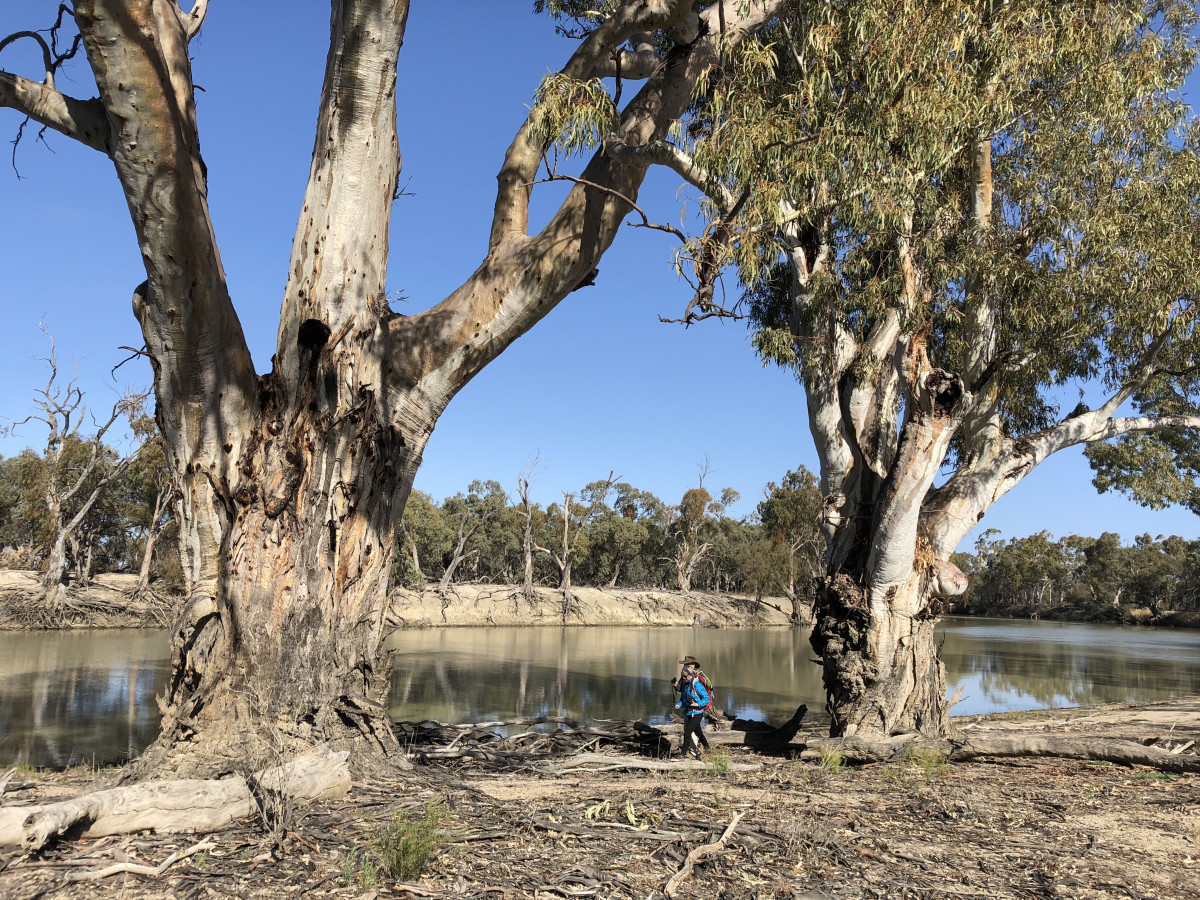 Until then, the Murray River Walk provides one of the best ways to explore the ancient gumtree forests by foot. On our final day, fuelled by eggs cooked with foraged saltbush (a native shrub), we set out on our final 15 kilometres. At Chowilla Creek—named for a “place of spirits” by the Erawirung people—we stop to rest. I sit with Marg, an Australian retiree who came on the walk with her husband Paul.

“The river has flowed through my life,” she tells me. On the day she met Paul, the two cooled off in the Murray after a hot day playing rugby. In the many years since, they’ve returned to houseboat with their family. But, she says, walking alongside the river made her really see it for the first time.

“You’re not just passively sitting on the water—you’re actively involved in the river,” she says. “You realize the land and water are interconnected—they’re part of each other. You realize you’re part of something bigger.”

Around us, I can hear the conversation of our fellow walkers. It’s not the polite chatter you’d expect at morning tea, but instead lively debate about conservation and government policy, and particularly what it means in times of drought.

The Murray may have once been ephemeral, but it’s always been present in people’s lives—and for as long as the cycle of wet and dry continues, there will be life and death along its shores. 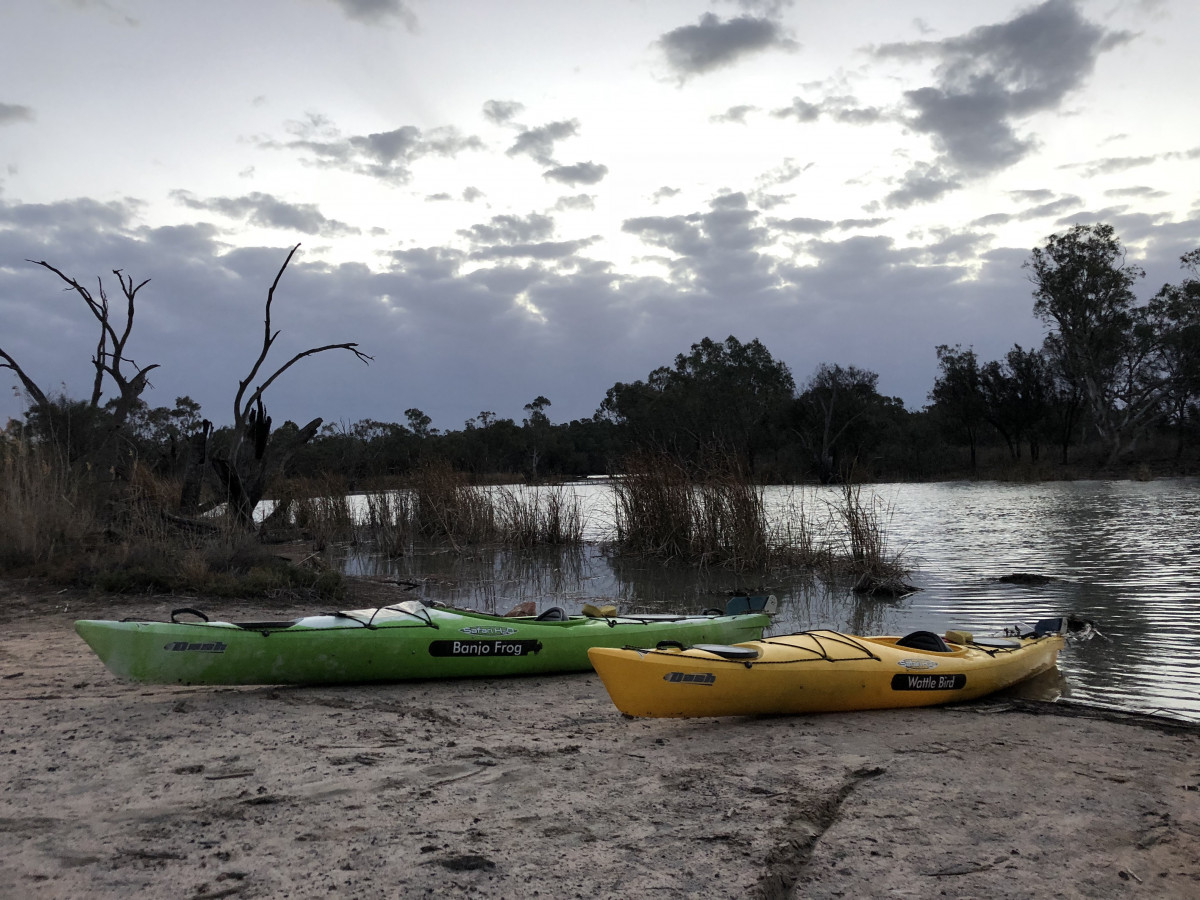